What Is The Best Way To Cut Steel Plate 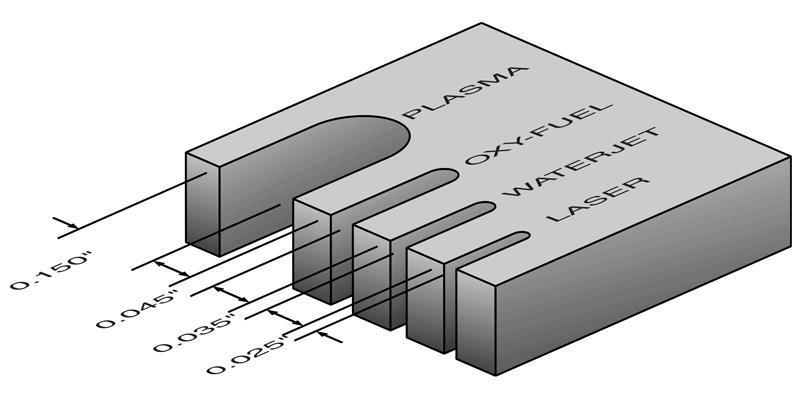 There are many ways to cut mild steel plate, some of which are suited for automation some are not. Some are suited for thinner plate, some for thicker. Some are fast, some are slow. Some are low-cost, some expensive. And some are accurate, some are not. This article takes a quick look at the four primary methods used on CNC shape cutting machines, compares each processes strengths and weaknesses, and then gives a few criteria that can be used to decide which process is best for your application.

Oxy-fuel torch cutting, or flame cutting, is by far the oldest cutting process that can be used on mild steel. It is generally viewed as a simple process, and the equipment and consumables are relatively inexpensive. An oxy-fuel torch can cut through very thick plate, limited primarily by the amount of oxygen that can be delivered. It is not unheard of to cut through 914mm, or even 1220mm of steel using an oxy-fuel torch. However, when it comes to shape cutting from steel plate, the vast majority of work is done on 300mm plate and thinner.

When adjusted properly, an oxy-fuel torch delivers a smooth, square cut surface. There is little slag on the bottom edge, and the top edge is only slightly rounded from the preheat flames. This surface is ideally suited for many applications without further treatment.

Oxy-fuel cutting is ideal for plates thicker than 1 inch, but can be used all the way down to about 6mm thick plate, with some difficulty. It is a relatively slow process, topping out around 510mm per minute on 1 inch material. Another great thing about oxy-fuel cutting is that you can easily cut with multiple torches at once, multiplying your productivity.

Plasma arc cutting is a great process for cutting mild steel plate, offering much higher speeds than oxy-fuel cutting, but sacrificing some edge quality. That is where plasma is tricky. Edge quality has a sweet spot that, depending on cutting current, generally ranges from about 6mm up to 38mm inches. Overall edge squareness starts to suffer when the plate gets really thin, or really thick (outside of the range I just mentioned), even though the edge smoothness and dross performance may still be quite good.

Plasma equipment can be pricy when compared to an oxy-fuel torch, since a complete system requires a power supply, water cooler (on systems over about 100 Amps), a gas control, torch leads, interconnecting hoses & cables, and the torch itself. But the increased productivity of plasma vs. oxy-fuel will pay for the cost of the system in no time.

You can plasma cut with multiple torches at once, but the additional cost factor usually limits this to two torches. However, some customers do opt for as many as three or four plasma systems on one machine, but those are usually high-end manufacturers who cut a high volume of the same parts to support a production line.

The laser cutting process is suitable for cutting mild steel from gauge thickness up to about 38mm. Beyond the 1 inch barrier, everything has to be just right to make it work reliably, including the material (laser grade steel), gas purity, nozzle condition, and beam quality.

Laser is not a very fast process, because on mild steel it is basically just a burning process that uses the extreme heat of a focused laser beam instead of a preheat flame. Therefore, the speed is limited by the speed of the chemical reaction between Iron and Oxygen. Laser is, however, a very accurate process. It creates a very narrow kerf width, and therefore can cut very precise contours and accurate small holes. Edge quality is usually very, very good, with extremely small serrations and lag lines, very square edges, and little to no dross.

The other great thing about the laser process is the reliability. The consumable life is very long, and machine automation very good, so that many laser cutting operations can be done “lights-out”. Imagine, loading a 10’ x 40’ plate of 12mm steel on the table, pressing the “Start” button, then going home for the evening. When you come back in the morning, you could have hundreds of parts cut and ready to unload.

Waterjet cutting also does a very nice job of cutting mild steel, giving a smooth and extremely accurate cut. Waterjet cutting accuracy can exceed that of laser cutting, because the edge smoothness can be better, and there is no heat distortion. Also, waterjet is not limited in thickness the way laser and plasma cutting are. The practical limit on waterjet cutting is around 6 to 8 inches, due to the length of time to cut that thickness, and the tendency of the water stream to diverge.

The drawback to waterjet cutting is the cost of operation. Up front equipment costs are usually a little higher than plasma, due to the high cost of an intensifier pump, but not as high as laser. But the cost-per-hour to run waterjet is much higher, primarily due to the cost of the garnet abrasive that goes into the cut.

Waterjet cutting also lends itself to cutting with multiple heads, and this can even be done with a single intensifier pump. But each additional cutting head requires additional water flow that either requires a larger pump or a smaller orifice.

So how do you make the best decision on which process to use?

۳٫ Consider which is more important: Productivity or Cost?

Do the parts lend themselves to being cut with 2 torches, 4 torches, or more? Then oxy-fuel is going to out-pace plasma or laser. Cutting with multiple plasma torches is possible, but gets expensive when you consider the initial investment for all that equipment. With waterjet, multiple waterjet cutting nozzles can be run with a single intensifier pump, if you buy a pump with a high enough flow rate to support multiple heads. Laser cutting has traditionally been limited to a single cutting head, although fiber laser opens the opportunity for multiple head simultaneous cutting.

Another consideration that throws a monkey-wrench into any calculation is the idea of multi-process cutting – using two of these cutting processes on the same part. The processes that are most logically combined are waterjet and plasma, or waterjet and oxy-fuel. With the new fiber laser technology, it is now possible to combine laser and plasma or laser and oxy-fuel. The advantage of multi-process cutting is the ability to use the slower, more accurate process for some contours, but then switch to the faster and cheaper process for other contours. The result is producing parts with the accuracy they need, but for far lower cost than if you used the high accuracy process to cut the entire part.

The overlap of thickness range and capabilities of these four processes makes it hard to choose which one to use on any particular mild-steel part. So fabricators or steel service centers who need the ability to cut a wide range of materials will often wind up with machines equipped with two or more cutting processes. Some times the only way to figure out which process is optimal for a specific part is to try it several different ways, and see which one works best.